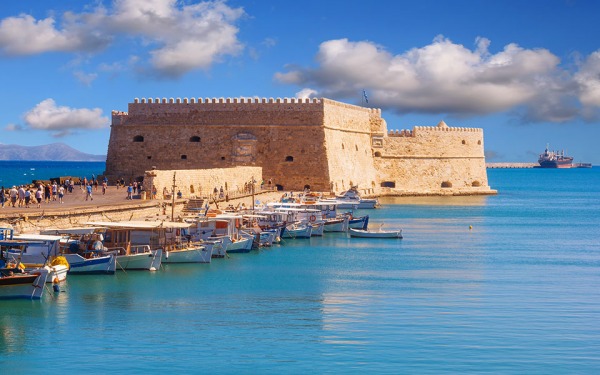 Heraklion or Iraklion is the largest city and the island of Crete and the Heraklion regional unit’s capital. It is the fourth largest city in Greece, with a population of 211,370.

Heraklion is a safe and comfortable city to travel to. Use common sense, keep an eye on your belongings, and do not walk late at night near bars and restaurants.

Public transport is safe and accessible. However, pickpocketing can happen in it. If you take a taxi - use only licensed taxi services.

Pickpocketing occurs on public transport and tourist destinations. Keep track of your belongings, do not leave your phone unattended, keep important documents in the hotel's safe.

The city is not subject to any serious risks of natural disasters. It can be sweltering in summer, so carry drinking water and avoid direct sunlight.

The risk of serious robbery and armed attacks is shallow in Heraklion. There is little danger of these attacks in the suburbs. However, the likelihood that you will be attacked is minimal.

Sometimes fraud with the sale of fake things and souvenirs is possible, do not buy anything handheld on the streets. Otherwise, the risk of fraud in this city is shallow.

Women traveling alone can feel quite safe and secure in this city. Heraklion is safe for women if they stick to common sense.

How Safe Is Heraklion for Tourists?

Heraklion is a very safe city to travel to.

The crime index is low here; the main problems are associated with petty theft and vandalism.

Use common sense to avoid serious risks in this city.

Use only licensed taxi services; street taxis without licenses can be dangerous and overpriced.

Always keep an eye on your belongings, do not leave wallets and mobile phones on the cafe table unattended.

Be aware of pickpocketing and bags snatchers at intersections by motorcyclists.

However, if you keep things with you, you have nothing to fear.

Avoid socializing with drunk young people at bars at night; they may wait for an opportunity to wave their fists.

Park your car only in guarded parking lots and do not leave any things inside the car – there are often cases of hacking cars for profit.

Protests can be a potential inconvenience because if they do, the streets will be crowded, and you will not go on tours or shop.

The police usually act promptly and always protect tourists’ interests, so ask for help if you need it.

Do I Need a Visa to Visit Heraklion?

Which Currency Is Used in Heraklion?

What Do I Need to Know about Airports in Heraklion?

Nikos Kazantzakis International Airport, a shared civil and military facility is 5 km away from the city center.

What Are Some Things to Do in Heraklion?

Heraklion, also known as Iraklio, is a port city and the capital of the Greek island of Crete. It’s known for the Palace of Knossos, just outside the city. The huge archaeological site dates back thousands of years to the Minoan civilization and includes frescoes and baths. Guarding the city’s Venetian port is the 16th-century Koules fortress. Heraklion Archaeological Museum has a large collection of Minoan art.

Is the Water in Heraklion Safe to Drink?

In general, the water in Heraklion is not safe to drink. You can use bottled water or boil tap water.

Is Uber Safe in Heraklion?

There is no Uber taxi in Heraklion. You can use any other local taxi services.