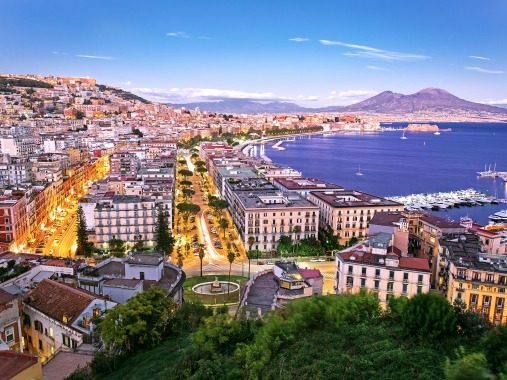 Naples is the regional capital of Campania and Italy’s third-largest city, after Rome and Milan, with a population of 967,069 within the city’s administrative limits as of 2017. Its province-level municipality is the third-most populous metropolitan city in Italy. Naples’ historic city center is the largest in Europe and has been designated as a UNESCO World Heritage Site. A wide range of culturally and historically significant sites are nearby, including the Palace of Caserta and Pompeii and Herculaneum’s Roman ruins.

There is a lot of pickpocketing, fraud, and vandalism in Naples, but with the observance of security measures, tourists can safely move in this city.

Use only licensed taxi services, do not take a taxi from the street. Otherwise, you may become a victim of fare fraud. If you are driving your car, be careful - Naples traffic is not the friendliest in the world.

Naples is at risk of a volcanic eruption and in a seismically active area. However, these risks are not very high.

Serious robberies and armed attacks can take place at night in poorly lit areas of the city. Avoid these places and do not walk alone late at night in Naples.

The risk of terrorism is low in Naples. Of course, the risk of attacks still exists due to the international position of the city. The global risk of terrorist attacks in public areas exists worldwide, so tourists should be vigilant.

There are many scammers in Naples, and they often try to deceive tourists, avoid beggars, participate in the lottery, and do not agree to take anything from your hands for free. All these actions will lead to the loss of your money or wallet with your phone. Avoid street barkers.

Women traveling alone can feel safe if they do not wander around the city late at night and avoid areas remote from Naples' center.

How Safe Is Naples for Tourists?

Naples is not the safest city in Italy, but there is no serious risk for tourists here.

The crime rate ranges from medium to high.

The main problems are burglary and car theft, theft, vandalism, and a high level of corruption.

There is a local mafia in the city – the Camorra – it is still active in the city, but not to the extent that it was before the turn of the century, as its activities are now significantly reduced and located underground, so they do not affect most of the local population.

They usually don’t contact tourists, but keep in mind that tourists are better off not contacting her either.

Wear an anti-theft backpack or keep your bags in sight.

Never leave your belongings unattended, even for a minute.

Especially on the tables in the cafe.

Always be on the lookout for buses, trams, and subways.

If you have a car: make sure you have not left anything of value inside that is visible from the outside, and if possible, park in a safe parking lot, not on the street.

In Naples, do not walk alone at night, especially for women.

Do not go to city parks after sunset.

Do I Need a Visa to Visit Naples?

Which Currency Is Used in Naples?

In Naples, the summers are short, warm, muggy, dry, and mostly clear, and the winters are long, cold, wet, and partly cloudy. The best time to visit Naples is between March and April when the weather is mild, and the tourist crowds aren’t quite so thick.

What Do I Need to Know about Airports in Naples?

Naples is served by Naples Airport, also known as Capodichino Airport, but you may use some other major international airports in Rome, Milan, Bologna, and Venice when coming to Italy.

What Are Some Things to Do in Naples?

Naples, a city in southern Italy, sits on the Bay of Naples. Nearby is Mount Vesuvius, the still-active volcano that destroyed nearby Roman town Pompeii. Dating to the 2nd millennium B.C., Naples has centuries of important art and architecture. The city’s cathedral, the Duomo di San Gennaro, is filled with frescoes. Other major landmarks include the lavish Royal Palace and Castel Nuovo, a 13th-century castle.

Is the Water in Naples Safe to Drink?

Naples tap water is safe to drink, but it may be a little bit chlorinated as every other public water.

Is Uber Safe in Naples?

There is an Uber taxi in Naples. You can call a taxi from the app on your phone. The cost of the trip will depend on the distance and time of day.