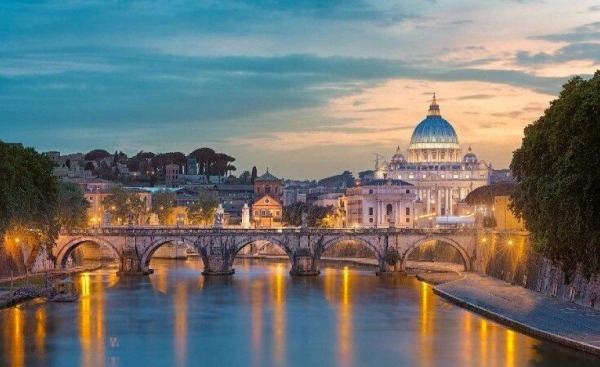 Rome is the capital and largest city of Italy and the Lazio region. It is famous for being the home of the ancient Roman Empire, the Seven Hills, La Dolce Vita (the sweet life), the Vatican City, and Three Coins in the Fountain. The historic center of the city is a UNESCO World Heritage Site.

Rome is a popular tourist destination with a lot of pickpocketing. If you are attentive to your surroundings and keep an eye on things, you will not become a thief victim.

Public transport in Rome is safe and well developed. However, pickpockets must be watched. Taxi is a reliable and convenient way to travel. Use only licensed taxi services and make sure the driver turns on the taximeter.

The risk of pickpocketing is the highest in Rome. Use an anti-theft backpack, do not shine with many cash and expensive things, never leave your phone and wallet on a table in a cafe unattended.

Rome is not in a zone of high risks of natural disasters, so this risk is minimal.

The risk of serious robbery and armed attacks is shallow in Rome. There is little danger of these attacks in the suburbs. However, the likelihood that you will be attacked is minimal.

The risk of terrorism is low in Rome. Of course, the risk of attacks still exists due to the international position of the city. The global risk of terrorist attacks in public areas exists worldwide, so tourists should be vigilant.

Rome's most common fraud is associated with people on the street trying to sell you fake expensive things for a low price. Never buy things like that. Also, do not participate in street lotteries, and be careful with those who ask or offer help.

Rome is generally a safe place even for women traveling alone. However, there have been cases of rape in the Termini Station area, so be careful (especially at night).

How Safe Is Rome for Tourists?

Rome is among the cities with an average crime rate.

There are very few violent crimes, but there are many scams and pickpockets targeting tourists.

As in any other big city, please do not look like a tourist: do not show your camera or camcorder to anyone and everyone, but keep your money in a safe place.

Stay alert and always keep an eye on your belongings.

If you have been robbed, try to find a police station (“commissariat”) and report it.

This is important for justifying insurance coverage and document replacement, although it is unlikely that your thief will get caught.

This is because a large number of tourists come here.

Wear an anti-theft backpack and try not to attract attention with expensive devices and a lot of cash.

Be attentive to those who ask or offer help – most often, these people try to distract your attention to steal something.

The main railway station, Termini, the Metro, and Trevi fountain’s central stops are well-known for pickpockets, so take extra care in these areas.

Do I Need a Visa to Visit Rome?

Which Currency Is Used in Rome?

In Rome, the summers are short, hot, humid, dry, and mostly clear, and the winters are long, cold, wet, and partly cloudy.

What Do I Need to Know about Airports in Rome?

Fiumicino is a town and comune in the Metropolitan City of Rome, Lazio, central Italy, with 80,500. It is famous for Leonardo da Vinci–Fiumicino Airport, the busiest airport in Italy and the sixth busiest in Europe.

What Are Some Things to Do in Rome?

As time passed, various monuments, palaces, and religious buildings have been constructed in the city. These now stand as beautiful tourist attractions and a reminder of the cities glorious past. Rome is consistently ranked as one of the top tourist destinations in Europe, and with sights such as the Colosseum and the Vatican, it is easy to see why.

Is the Water in Rome Safe to Drink?

The tap water in Rome is safe to drink.

Is Uber Safe in Rome?

There is an Uber taxi in Rome. You can call a taxi from the app on your phone. The cost of the trip will depend on the distance and time of day.