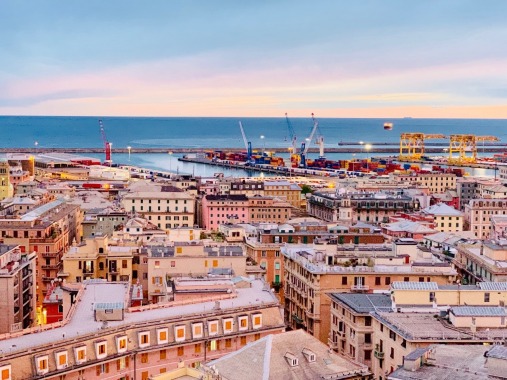 Genoa is the capital of the Italian region of Liguria and the sixth-largest city in Italy. In 2015, 594,733 people lived within the city’s administrative limits.

Like any significant city in Genoa, pickpockets do happen. Especially on public transport during rush hour. Keep track of your belongings, and do not leave bags and wallets unattended on the tables in the cafe.

The risk of severe robbery and armed attacks is shallow in Genoa. There is little danger of these attacks in the suburbs. However, the likelihood that you will be attacked is minimal.

The most common scam in Genoa involves fundraising or signing petitions. Under the guise of good intentions, scammers are deceiving tourists and collecting donations in their pockets.

Women traveling alone can feel relatively safe in Genoa. The main thing is to adhere to the usual precautions and monitor your surroundings.

How Safe Is Genoa for Tourists?

Genoa is a relatively safe city to travel to.

Streets in Genoa are usually relatively safe, especially in the main tourist areas and residential areas.

However, tourists should be careful in Genoa’s old town.

The tourist should be careful in the sketchy areas north of Piazza Caricamento and around Via di Pre, Via Della Madelena, Via del Campo, Via Banca, and Via Luccoli. Try to avoid dark, narrow alleys unless you know what you are doing.

Pay close attention to your surroundings and avoid displaying flamboyant objects or carrying large amounts of cash or valuables.

If you want to stay in the old town, choose hotels south of the cathedral, around Piazza di Ferrari, or near the lively Via di Porta Soprano.

Pickpockets are a significant threat to the city.

Be especially careful around the Via San Lorenzo / Via San Bernardo / Via San Donato area (a popular and very crowded nightlife area for students and young people) and on city buses.

Do I Need a Visa to Visit Genoa?

Which Currency Is Used in Genoa?

In Genoa, the summers are short, warm, humid, and mostly clear, and the winters are long, cold, and partly cloudy. The best time of year to visit Genoa for hot-weather activities is from early July to late August.

What Do I Need to Know about Airports in Genoa?

International Airport Genoa, named after Christopher Columbus, is a Genoa airport built on an artificial peninsula, 6 km from the city center. The airport serves the port of Genoa and is currently operated by Aeroporto di Genova, which has modernized the airport complex.

What Are Some Things to Do in Genoa?

Genoa is a port city and capital of the Liguria region in northwestern Italy. Genoese merchants have been engaged in maritime trade for centuries. The old townhouses the Romanesque Cathedral of San Lorenzo with a black and white façade and frescoes. Through narrow streets, you can walk to Ferrari Square, where the famous bronze fountain and the Opera House of Carlo Felice are located

Is the Water in Genoa Safe to Drink?

Is Uber Safe in Genoa?