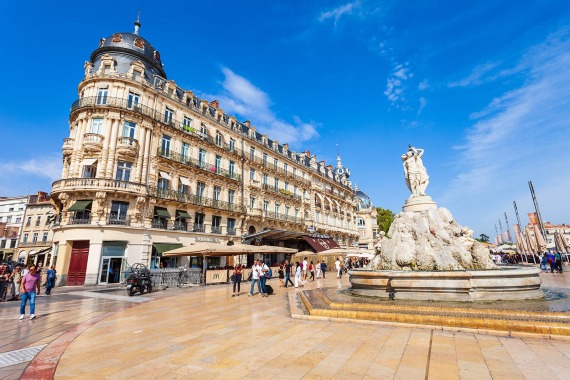 Montpellier is one of the largest cities in the south of France, the seventh-largest in the whole country, a commune, the administrative center of the Hérault department of the Occitania region, and the center of the Montpellier-Mediterranean metropolis. It is located in the fertile valley of the Les River (fr.), 11.1 km from the Mediterranean coast, 69 km. Northeast of Beziers and 52 km. Southwest of Nîmes.

Montpellier is sometimes overwhelmed by floods and excessive heat. However, this is not particularly worrisome as these risks are rare.

In the suburbs of Montpellier, local gangs' showdowns take place, during these showdowns, there are shootings and kidnappings. Avoid these areas and don't get involved with drugs.

How Safe Is Montpellier for Tourists?

Montpellier is not the safest city to travel to.

The crime index here is between high and medium levels.

The main problems are related to attacks, vandalism, and drug trafficking.

Popular with tourists and travelers, this city has many fantastic attractions.

But, just like with the big cities in the world, travelers are concerned about safety.

There are several dangers in the French city that should be avoided by taking basic precautions.

For those who love to drive on vacation, car theft can be a serious problem.

Burglaries and pickpockets are common, and violent crimes tend to occur from time to time.

You should be careful at night and avoid certain places, especially when you are alone.

On the street, day and night, there are pickpockets and thieves who rather attack reckless tourists.

If you are traveling in your own or rented car, you only need to park in guarded parking lots and not leave important things in the car.
Women should be especially careful when walking at night – it is better to walk with friends or use a taxi to get to your hotel.

Another major problem in France is the terrorist attacks that have occurred over the past two years.

In this regard, France’s police and military units are patrolling important landmarks, train stations, and airports.

Do I Need a Visa to Visit Montpellier?

Which Currency Is Used in Montpellier?

In Montpellier, the summers are short, warm, dry, and mostly clear, and the winters are long, cold, windy, and partly cloudy. The best time of year to visit Montpellier for hot-weather activities is from late June to late August.

What Do I Need to Know about Airports in Montpellier?

What Are Some Things to Do in Montpellier?

The city is famous for its majestic Gothic-style St. Peter’s Cathedral, crowned with conical towers, founded in 1364. The area of Antigone is a modern complex of residential and office buildings built in the neoclassical style. The exposition of the Fabre Museum presents canvases by eminent French and European masters.

Is the Water in Montpellier Safe to Drink?

The tap water is perfectly safe to drink.

Is Uber Safe in Montpellier?