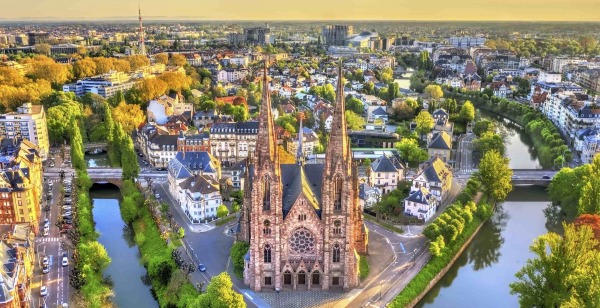 Strasbourg is the prefecture and largest city of the Grand Est region of Eastern France and the official seat of the European Parliament. Located at the border with Germany in the historic area of Alsace, it is the prefecture of the Bas-Rhin department.

Strasbourg is considered one of the safest cities in the region. The crime rate is low here. You should beware of the outskirts of the city and watch your belongings, especially during the holidays.

The risk of severe robbery and armed attacks is shallow in Strasbourg. There is little danger of these attacks in the suburbs. However, the likelihood that you will be attacked is minimal.

The most common scams in Strasbourg are related to street beggars. Be suspicious of anyone who asks or offers you help.

Women traveling alone can feel quite safe in Strasbourg. The main thing is to adhere to the usual precautions and monitor your surroundings.

How Safe Is Strasbourg for Tourists?

Strasbourg is a very safe city to travel to.

Strasbourg is a popular destination for tourists.

The city enjoys a very positive reputation among both travelers and locals.

While Strasbourg is generally safe, visitors should be on the lookout.

The city center is especially good for living, but the suburbs are the ones to avoid.

Most of the crimes reported in Strasbourg take place in the suburbs, as in many major cities around the world.

Take the usual precautions (great care in a large crowd, no wallet in your back pocket, etc.).

Many hotels should offer secure parking for your car, but the tourist areas of the city are generally safe.

Shops are closed on Sundays, with the exception of some corner shops and bakeries.

Therefore, try to avoid such places on this day, especially in the late hours.

L’Esplandade is said to have one of the highest crime rates in Strasbourg, but still better than parts of Paris.

When it comes to quality of life, La Robertsau and Orangerie seem to be the best places to live.

These areas are located close to the Council of Europe and are incredibly peaceful most of the time.

Do I Need a Visa to Visit Strasbourg?

Which Currency Is Used in Strasbourg?

In Strasbourg, the summers are warm, the winters are icy, and partly cloudy year-round. The best time of year to visit Strasbourg for warm-weather activities is from mid-June to mid-September.

What Do I Need to Know about Airports in Strasbourg?

Strasbourg International Airport is a French airport located in Entseime, 10 km south-west of Strasbourg, in the Bas-Rhine department, in Alsace. The number of passengers in 2020 was 513,579.

What Are Some Things to Do in Strasbourg?

The city is close to the border with Germany, so both French and German traditions have influenced its culture and architecture. Strasbourg Cathedral in the Gothic style is famous for its astronomical clock, in which figures of Jesus Christ and the apostles move daily, and a spire 142 meters high, from the central part of which offers a stunning view of the Rhine River.

Is the Water in Strasbourg Safe to Drink?

Tap water is safe to drink in Strasbourg.

Is Uber Safe in Strasbourg?