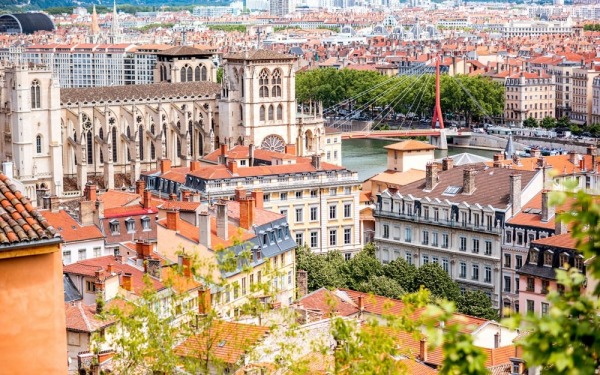 Lyon or Lyons is the third-largest city and second-largest urban area of France. It is located at the confluence of the rivers Rhône and Saône, about 470 km south-east of Paris, 320 km north of Marseille, and 56 km northeast of Saint-Étienne. Inhabitants of the city are called Lyonnais.

Lyon is generally safe to travel to. However, tourists should keep track of their belongings and do not leave bags and money unattended. It is better to bypass some areas and not walk the city streets late at night.

Public transport in the city is well developed and safe. However, pickpockets can be found here during rush hour and in the evening. Use only licensed taxi services when taking a taxi.

In the touristy Old Lyon, there are well-organized pickpocket groups. Watch your belongings in this place, especially carefully. Be wary of those who ask for or offer help.

The risk of serious robbery and armed attacks is shallow in Lyon. There is little danger of these attacks in the suburbs. However, the likelihood that you will be attacked is minimal.

Most often, fraud in the city is associated with street beggars and fake money-raising centers for all sorts of problems. Be especially careful in tourist places.

Women traveling alone can feel quite safe in Lyon. The main thing is to adhere to the usual precautions and monitor your surroundings.

How Safe Is Lyon for Tourists?

Lyon has an average level of security, with a crime rate ranging from low to medium.

The main problems are associated with petty robberies, car theft, and fraud.

It can be said that tourists are usually not concerned with the big problems of the city.

If you exercise your usual attentiveness and caution, you will remain safe.

It is better to keep your personal belongings and expensive devices with you and not leave them in the car when you leave.

It is also recommended to lock the car when you leave it.

On the rue Sainte-Catherine, behind the Place des Terreaux, you can often find many aggressive drunk people.

The police are watching closely, but it is probably best to avoid the area alone, especially at night.

In densely populated areas such as Rue de la République or outside of Part-Dieu station, you may meet people promoting charity; they can be recognized by their specific colored clothing.

They will not ask you for money but rather provide you with information documents that encourage you to donate.

Never give money on the street to those who claim to be working for charity and do not have official documents, or if the documents look questionable.

Do I Need a Visa to Visit Lyon?

Which Currency Is Used in Lyon?

The euro is the official currency in France. The euro is divided into 100 cents.

In Lyon, the summers are warm; the winters are frigid, partly cloudy year-round. The most pleasant weather is from June to September.

What Do I Need to Know about Airports in Lyon?

Saint-Exupéry Airport is 25 km east of Lyon, is an airport that has a few intercontinental flights but is developing fast. Another one is Grenoble-Isère Airport between Lyon and Grenoble and is served by some low-cost airlines.

What Are Some Things to Do in Lyon?

Is the Water in Lyon Safe to Drink?

Tap water is safe to drink in Lyon.

Is Uber Safe in Lyon?

There is an Uber taxi in Lyon. You can call a taxi from the app on your phone. The cost of the trip will depend on the distance and time of day.