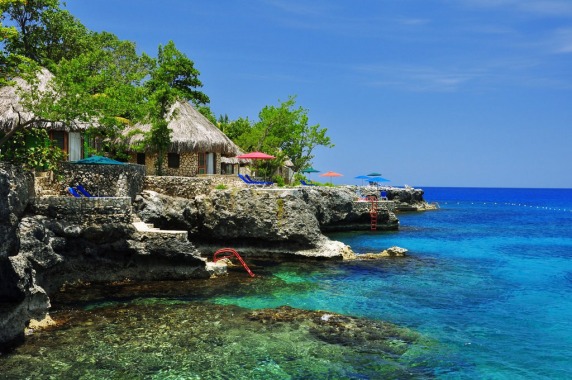 Jamaica cannot be called a travel-safe country. However, if you take increased measures to ensure your safety, then you can have a good time. In no case do not contact the drug dealers and do not walk in areas remote from the centers in the dark.

Public transport is not safe: most often it is attacked by criminals. Use a taxi or a rented car. Make sure that the driver turns on the taximeter before you get into the car.

Pickpockets are found almost everywhere in Jamaica. Their goal is gape tourists. You should always keep track of your belongings and surroundings. Do not trust those who ask or offer your help - most likely; they will try to deceive you. Hold your bags tight and keep valuables in the hotel safes.

Jamaica is one of the most disaster-prone countries in the world. Significant risks are associated with hazards, including hurricanes, floods, droughts, earthquakes, storm surges, and landslides. Learn weather conditions before

Armed attacks and robberies often take place in Jamaica. Most often, this is connected to drug trafficking and drug dealers. However, it should be remembered that tourists are also accidental victims of these crimes. Take care of your safety, avoid suspicious areas, and don't walk the streets late at night.

Although there is no recent history of terrorism in Jamaica, the possibility of attacks cannot be ruled out. Avoid mass gatherings, political and other demonstrations. Examine the situation in the country on the risk of terrorism before your visit here.

Fraud occurs in Jamaica. It is especially common in tourist areas. Check everything twice, buy services and goods only in licensed places. Withdraw money from ATMs at banks and always monitor your surroundings. Suspicious personalities are best avoided altogether.

For women traveling alone, being in Jamaica can be unsafe. It is best to take care of additional safety measures, do not walk late at night through the streets of the city, do not sit up in bars, and do not get in touch with local men.

How Safe Is Jamaica for Tourists?

Jamaica is one of the unsafe countries for travel.

The crime rate is very high.

The main problems are related to robberies, theft of things, attacks, hacking of houses, and cars.

The country also has a problem with drug trafficking, and bribery and corruption flourish in the political and economic life of Jamaica.

Travelers should be aware that many killings are taking place in Jamaica.

Governments usually advise travelers who have been in the country for an extended period to notify their embassy or consulate so that they can be contacted in case of an emergency.

Most crimes in Jamaica involve drugs and lotteries.

Visiting tourists in resorts is usually not a victim of serious crimes.

Avoid certain parts of the island at night.

Drugs and alcohol are common, and rural and remote areas are especially dangerous.

Armed men can pose a threat to women in some areas.

The interior of the island, such as the Spanish city and parts of Kingston (such as Trench Town), should be avoided even during the day.

However, those who are interested in visiting the cultural yard in Trench should be safe if they travel during daylight hours with a local guide.

Do I Need a Visa to Visit Jamaica?

Which Currency Is Used in Jamaica?

The Jamaican dollar has been the currency of Jamaica since 1969. It is often abbreviated to J$, the J serving to distinguish it from other dollar-denominated currencies. It is divided into 100 cents.

The best times to visit Jamaica for ideal weather are mid-November to mid-April and June to August. Average temperatures in Jamaica vary very little and the weather feels hot all year with a very low chance of rain throughout the year.

What Do I Need to Know about Airports in Jamaica?

What Are Some Things to Do in Jamaica?

Jamaica is a Caribbean island-state covered in mountains, rainforests, and reefed beaches. Most of the country’s all-inclusive resorts are located in Montego Bay, known for its British colonial architecture, and Negril, which is considered the best place for diving and snorkeling. Jamaica is the birthplace of reggae style, so in the capital of the country, Kingston, you should visit the Bob Marley Museum, dedicated to the famous artist.

Is the Water in Jamaica Safe to Drink?

The raw water quality in Jamaica is generally good across many locations in Jamaica. Water is usually safe to drink from faucets throughout the island, except in the most far-flung rural regions.

Is Uber Safe in Jamaica?

There is no Uber service in Jamaica. But you can you any other taxi services in this country.