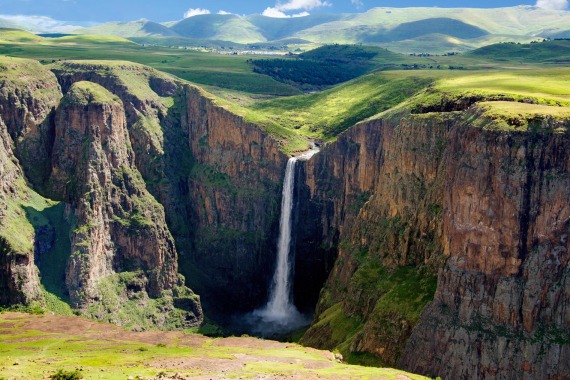 Lesotho is a relatively safe country to travel to. Still, there are a lot of minor crimes, so you should always be on the alert and carefully monitor your belongings and surroundings. Before visiting here, you should find out if you need vaccination.

In Lesotho, it is customary to travel on your transport. You can also use a taxi. However, be sure to use only licensed taxi services. When driving on the roads of Lesotho, you must be extremely careful as the road conditions are not very good. Always park your car in secure parking lots and lock your vehicle.

There are a lot of pickpockets in Lesotho; you can encounter them at any bazaar, train station, or in tourist places. Do not leave your things unattended, watch your surroundings. Avoid those who ask or offer you help.

Lesotho's natural hazards include floods, droughts, frosts, strong winds, and heavy snowfalls. All this leads to the death of the local population and livestock. Explore the natural surroundings before your visit here.

Violent robbery and assault is a big problem in Lesotho. Tourists should be cautious not to trust strangers. Also, at night it is better to travel by car or taxi, avoid distance from the center and dimly lit areas.

Terrorism in Lesotho is not conventional, but it cannot be ruled out. Study the political situation in the country and do not participate in rallies and street demonstrations. It is also better to avoid crowds.

There are a lot of scammers in Lesotho. Usually, their goal is tourists. To avoid the risk of being deceived, always be vigilant, watch your surroundings, do not trust those who ask or offer help.

Women traveling alone in Lesotho may not feel very comfortable. It is recommended to have an escort, and avoid communication with local men. At night, it is better to return to the hotel by taxi.

How Safe Is Lesotho for Tourists?

Lesotho is not a very safe country.

The crime index ranges from medium to high.

The main problems are related to the theft of things, robberies, drug trafficking, violent crime, and corruption.

In some regions of the country, it is risky to go alone in cities.

Choose a guide or company to accompany in dubious areas.

Avoid people who offer you to participate in the lottery or give money for charity.

Most often, they turn out to be scammers.

Be careful when traveling in your car – very often, the rules of the road are not respected in Lesotho.

Also, always lock your car when you leave and park in a guarded parking lot.

Hacking and carjacking are not uncommon.

Therefore, do not leave any things inside the car when you leave.

It should be remembered that the incidence of HIV / AIDS in Lesotho is the third highest in the world – about 25% or 1 out of 4 infected. Consult your doctor about what vaccinations you will need, but they most likely include hepatitis A, hepatitis B, and typhoid fever. If you have been in the countryside for a long time, then rabies vaccination would be a good idea. Tropical diseases, such as malaria, yellow fever, and bilgaria, are absent in Lesotho.

Do I Need a Visa to Visit Lesotho?

A foreign national wishing to enter Lesotho must obtain a visa unless they are a citizen of one of the eligible visa-exempt countries. A valid passport is a must.

Which Currency Is Used in Lesotho?

The Loti is the currency of the Kingdom of Lesotho. It is subdivided into 100 Lisente (sg. Sente). It is pegged to the South African rand on a 1:1 basis through the Common Monetary Area, and both are accepted as legal tender within Lesotho.

The best times to visit Lesotho for ideal weather are January to mid-April and September to mid-December. Average temperatures in Lesotho vary greatly, and the weather feels nice most of the year, excluding some cold weeks in the winter, with a meager chance of rain or snow throughout the year.

What Do I Need to Know about Airports in Lesotho?

Lesotho – has several airports. The primary and busiest airport is in the capital. Moshe I International Airport is the airport serving Maseru, the capital of Lesotho. It is located in Mazenod, 18 km southeast of the center of Maseru.

What Are Some Things to Do in Lesotho?

Lesotho is an alpine kingdom surrounded by the territory of the Republic of South Africa. The area of the country is covered with a dense network of rivers and mountain ranges, the highest peak of which is Tabanan-Ntlyanyana (3482 m). On the Taba-Bosiu plateau near the capital of Lesotho, Maseru, the buildings erected in the 19th century during the reign of King Moshvesve, I survived. The famous Mount Kilon rises above the plateau – a symbol of the country’s indigenous people, Basuto.

Is the Water in Lesotho Safe to Drink?

Lesotho is a mountainous and fairly ‘water-rich country’, but suffers from a lack of clean drinking water due to inadequate sanitation. Tap water isn’t drinkable.

Is Uber Safe in Lesotho?

Uber service is not available in Laos. You can use any other local taxi services.