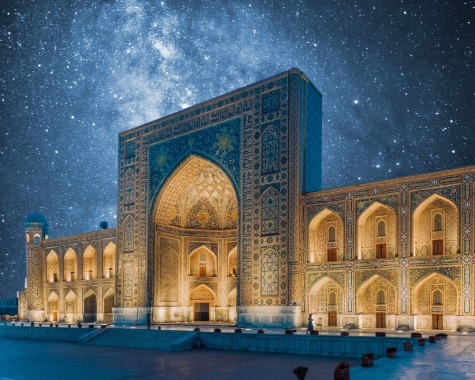 Uzbekistan is a fairly safe country to travel. However, petty crimes are also committed here. Use common sense when traveling in this country.

Public transport in Uzbekistan is not the safest, but it is well developed, and you can travel around the country on it. Keep track of your belongings and your surroundings. Taxis are reliable, make sure the driver is using a taximeter. If you are traveling on your own or rented car, be careful - not all roads in the country are in good condition, and drivers often violate traffic rules.

Pickpockets in Uzbekistan can operate in crowded places: tourist attractions, train stations, airports, and public transport. Just keep an eye on your belongings and your surroundings to avoid this problem.

Earthquakes, droughts, landslides, epidemics, and floods are the main disasters in Uzbekistan. Study the weather conditions before you visit this country.

Serious attacks and kidnappings are rare in Uzbekistan. However, in the border regions, especially near Afghanistan, this may well happen. Avoid traveling to places not recommended for tourists.

There have been no terrorist attacks in Uzbekistan's recent history. However, you always need to be on the alert. Avoid political and religious demonstrations, do not participate in street rallies.

One of the most common scam activities is that a stranger approaches the victim and says that he found money on the street. They will then try to enroll you in an elaborate scheme that will result in you “splitting” the money — only after you have collected some of your own, of course. Also, avoid shopping in questionable places. And only withdraw cash from ATMs at banks to prevent skimming your card.

Women traveling alone are not advised to be on the streets late at night. It is also best not to sit late in bars or draw undue attention to yourself with your behavior or clothing.

How Safe Is Uzbekistan for Tourists?

Uzbekistan is a reasonably safe country to travel to.

The crime index here is at a reasonably low level; the police have a lot of power in the country.

As usual, petty crimes are possible here too.

The areas of Uzbekistan bordering Afghanistan should be avoided for all but essential travel.

Extreme caution should also be exercised in areas of the Ferghana Valley bordering Tajikistan and Kyrgyzstan.

There have been several security incidents in this region, as well as several exchanges of gunfire across the Uzbek/Kyrgyz border.

Some border areas are also mined. Travelers should, therefore, avoid these areas and cross only at authorized border crossing points.

If visiting mountainous border villages near Tajikistan that don’t have official border crossings, one almost always has to register at the local police office, regardless of the nationality.

There is a penalty for not doing that. It is also advised to generally not wander alone along the border during official national holidays, especially Novruz.

For the most part, Uzbekistan is generally safe for visitors, perhaps the by-product of a police state.

There are many anecdotal (and a significant number of documented) reports of an increase in street crime, especially in the larger towns, particularly Tashkent.

As economic conditions in Uzbekistan continue to deteriorate, street crime is increasing.

Do I Need a Visa to Visit Uzbekistan?

Which Currency Is Used in Uzbekistan?

The soʻm is the currency of Uzbekistan in Central Asia. This soʻm is subdivided into 100 tiyin.

The best times to visit Uzbekistan for ideal weather are April to June and September to November. Average temperatures in Uzbekistan vary an incredible amount and the weather feels very nice much of the year but hot in the summer and cold in the winter with a very low chance of rain or snow throughout the year.

What Do I Need to Know about Airports in Uzbekistan?

There are currently 11 airports in Uzbekistan that are operated by Uzbekistan Airways National Air Company. Islam Karimov Tashkent International Airport is the main international airport of Uzbekistan and the 3rd busiest airport in Central Asia. It is located 12 km from the center of Tashkent.

What Are Some Things to Do in Uzbekistan?

Uzbekistan is a country in Central Asia that was once part of the USSR. It is famous for its mosques, mausoleums, and structures erected on the Great Silk Road – an ancient trade route between China and the Mediterranean. The city of Samarkand, which was an essential point on this path, gained worldwide fame thanks to the Registan Square, which is surrounded by three madrasahs (Muslim educational institutions) decorated with mosaics, erected in the 15th and 17th centuries.

Is the Water in Uzbekistan Safe to Drink?

In Uzbekistan, less than half the population has access to good quality drinking water, and fewer than 1 in 5 urban households receive water 24 hours per day. Tap water isn’t drinkable.

Is Uber Safe in Uzbekistan?

There is an Uber taxi in Uzbekistan. The fare will depend on trip length and time of the day. You can call a taxi from the app on a smartphone.