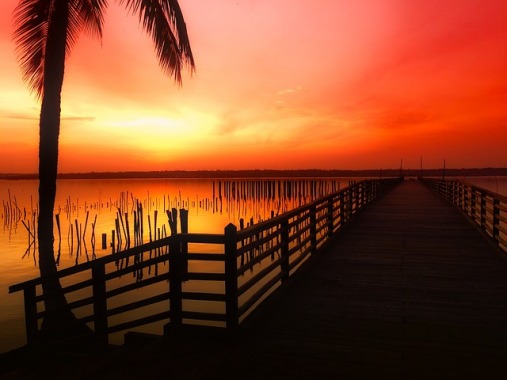 Benin, or officially – Republic of Benin, is located in West Africa.

It is bordered by Burkina Faso, Nigeria, Niger, and Togo.

This interesting country attracts the attention of many tourists with safari, wildlife, Voodo religion, museums, and many interesting restaurants.

Surfers love the coastal parts of Benin that are perfect hideaways from the noise and everyday stress.

Temple des Pythons is a place to go if you are not afraid of snakes.

Pythons are worshipped and accepted here.

History lovers should visit the Ouidah Museum of History which was a slave trade center and a Portuguese fort in the past.

Benin is a country where friendly people live. However, the crime rate is high and it is necessary to be careful during the entire stay in Benin. Make sure not to go to deserted and remote areas since that may be risky.

The transport in Benin is very risky since there were cases of carjacking, armed robberies, and hold-ups. Take extra care when traveling. Avoid traveling at night and be alert if you travel alone. Don't show expensive items, so you don't attract attention.

Pickpocketing occurs frequently in Benin, so make sure to keep all the valuable things close to you. Never leave your bag unattended and don't attract attention by carrying jewelry or expensive gadgets. Stay alert in public transportation and crowded areas.

Flood is the biggest natural hazard in Benin. Back in 2010, there were 43 people killed and almost 100,000 people became homeless. Material damage caused by floods in the past was enormous and it affected the lives of thousands of families in Benin.

Mugging risk is high in Benin. These incidents occur even in broad daylight. Sometimes, thieves carry weapons, so it advised not to resist it, because that may make things worse. The Boulevard de France is particularly dangerous, so stay vigilant.

There is a realistic threat of terrorist attacks in Benin. Be particularly careful in places where a lot of people gather. Follow the security protocol to the greatest extent possible in case you notice anything suspicious. Be alert at all times.

Scams are common in Benin. Tourists usually get approached with some sad story about being robbed and in need of money for the ticket. Don't fall for that. Also, pay special attention when withdrawing money on the ATM, since stealing credit card information is frequent.

Benin is not a country for solo female tourists. It is too risky. It is far safer to go with someone. In case you still decide to go, make sure not to walk alone at night. Be somewhere safe after 6 pm.

How Safe Is Benin for Tourists?

When visiting Benin there are some things that tourists have to pay attention to in order to stay safe.

Traffic accidents are frequent in Cotonou, so make sure you stay safe at all times.

Armed robberies are also possible, so be particularly careful when you notice something suspicious.

Stay alert always and keep an eye on your belongings.

If you hear someone saying “Yovo” and staring at you, don’t be afraid, it just means white person.

This is pretty harmless but it can be disturbing and tiring sometimes.

Also, don’t go swimming along the coastline since the currents can be too strong.

Pay even more attention if you are not a very good swimmer.

Opt for lagoon or the swimming pool in your hotel.

Women should choose older guides to protect themselves from the courtship of younger guys.

They often ask for selfies, tend to hug women and it can be pretty uncomfortable, while older guides have more respect and want to talk about the local customs, which is the whole point of the tour.

Local taxi drivers may charge you more, so make sure you arrange for a price in advance and count your money twice.

Do I Need a Visa to Visit Benin?

Citizens of all countries, except African countries and Hong Kong citizens, require a visa to enter Benin.

It can be obtained online.

Other requirements are one blank page in the passport for entry stamp and the passport must be valid for at least 6 months.

Which Currency Is Used in Benin?

The official currency in Benin is West African CFA franc.

Carrying euros is recommended as well since they can be exchanged easily.

The climate in Benin is tropical.

There are two dry and two rainy seasons.

The best time for traveling is from December until March, so tourists can enjoy sunny days.

What Do I Need to Know about Airports in Benin?

Benin has only one airport for international flights – Cotonou Cadjehoun Airport.

This one is located in Cotonou, but there are also a few others that cover domestic flights.

This airport serves more than 300,000 passengers a year.

Getting travel insurance is recommended no matter how short your stay may be.

Coverage for medical and dental expenses, as well as the coverage for theft and lost luggage, is truly a necessity.

What Are Some Things to Do in Benin?

Once in Benin, don’t miss out on visiting Zinzou Foundation Museum where you’ll see sculptures, sound, and video installations and paintings that show off African art.

Centre Songhai is a place to visit if you want to learn more about sustainable farming.

Is the Water in Benin Safe to Drink?

Tap water quality varies widely and many regions lack a water treatment system and water storage that is safe.

Sanitation infrastructure is poor and in order to avoid travelers’ diarrhea, drink only boiled water.

Is Uber Safe in Benin?

UberX is available in Benin as of this year.

The rides are reliable, affordable and safe.

The use is really easy and convenient.

Get your driver at the touch of a button.