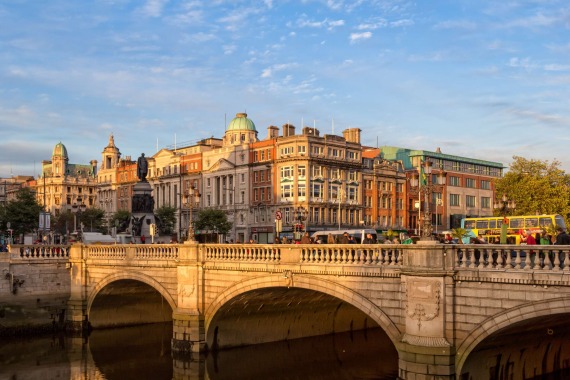 Ireland - safety as a country

Dublin is the capital and largest city of Ireland. Situated on a bay on the east coast, at the mouth of the River Liffey, it lies within the province of Leinster. It is bordered on the south by the Dublin Mountains, a part of the Wicklow Mountains range. It has an urban area population of 1,173,179. Dublin is a historical and contemporary center for education, the arts, administration, and industry.

Dublin is generally a fairly safe city to travel to. Petty crimes such as theft and break-in of cars happen, so you need to monitor your belongings and surroundings carefully.

Public transport is safe to get around in Dublin, as are taxis. Use only licensed taxi services. If you are traveling by car, make sure you know the local traffic. Sometimes it can be quite chaotic and aggressive.

Pickpocketing occurs in tourist places, in the area of train stations and bus stations. Keep track of your belongings, do not leave your bags unattended.

Dublin has no major natural disaster threat. Study the natural conditions before your trip here.

The risk of serious robbery and armed attack in Dublin is shallow. Avoid communicating with suspicious individuals and not walking late at night in remote areas from the city center.

We can say that there are practically no fraudulent schemes in Dublin. In any case, tourists should be careful and watch out for their surroundings. Avoid communicating with intrusive and suspicious people.

Women traveling alone can feel quite safe in Dublin. The main thing is to adhere to the usual precautions and monitor your surroundings.

How Safe Is Dublin for Tourists?

Dublin is a safe city to travel to.

However, there are certain problems associated with petty theft, car theft, vandalism.

There are also problems with drug trafficking.

Like most other major popular cities, Dublin is subject to pickpocketing, robbery, and even tourist attacks.

Be especially vigilant, preferably avoid walking in the city center after the bar is closed, when very drunk people roam the streets, and when aggressive behavior is most likely.

Most local people are kind and ready to help you, but a crowd of drunk or drugged strangers will make anyone feel uncomfortable.

The O’Connell Street area and the surrounding area attract many drug addicts due to many methadone clinics.

Be careful when crossing the road in Dublin – driving here often breaks the rules and may ignore the color of traffic lights or pedestrian crossing.

Traffic in Ireland moves to the left of the road;

If you are not used to this, then this is another reason for caution.

Do not leave anything of value in the car when parking.

Do I Need a Visa to Visit Dublin?

Which Currency Is Used in Dublin?

The euro is the official currency in Ireland. The euro is divided into 100 cents.

In Dublin, the summers are comfortable; the winters are long, icy, and wet; and it is windy and partly cloudy year-round. The best time to visit Dublin is June through August.

What Do I Need to Know about Airports in Dublin?

What Are Some Things to Do in Dublin?

Dublin, capital of the Republic of Ireland, is on Ireland’s east coast at the River Liffey’s mouth. Its historic buildings include Dublin Castle, dating to the 13th century, and imposing St Patrick’s Cathedral, founded in 1191. City parks include landscaped St Stephen’s Green and huge Phoenix Park, containing Dublin Zoo. The National Museum of Ireland explores Irish heritage and culture.

Is the Water in Dublin Safe to Drink?

Tap water is safe to drink unless otherwise noted.

Is Uber Safe in Dublin?

There is an Uber taxi in Dublin. You can call a taxi from the app on your phone. The cost of the trip will depend on the distance and time of day.