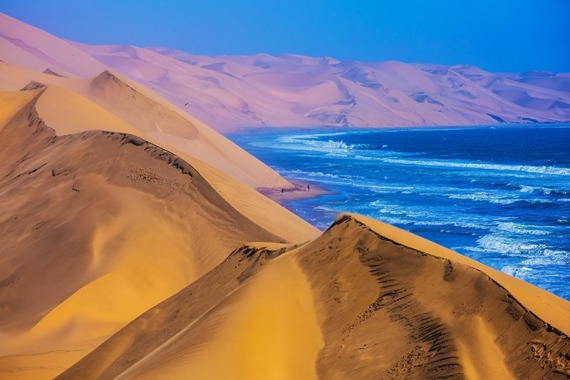 Namibia is relatively safe to travel. Although minor thefts and robberies against tourists are not uncommon here. However, you are unlikely to encounter more severe incidents in this country. Most crimes are committed in the capital.

Public transport is not sufficiently developed; it is not convenient to travel around the country on it. It is better to use licensed taxi services, rented cars, or take a tour.

Pickpockets are common in Namibia. Their goal is western tourists. Try not to shine with large amounts of money and jewelry. Do not draw attention to yourself with expensive devices. Always keep an eye on your pockets and bags.

Namibia is susceptible to many of the same natural disasters that affect much of Southern Africa, namely, cyclical drought, epidemics, floods, and food insecurity.

Armed severe robberies and attacks are found in the country's capital, Windhoek. Be especially careful near ATM when withdrawing money. Avoid the remote and dark streets and do not stay late at night alone on the roads of the country.

Namibia is not at high risk of terrorism. As usual, use common sense, do not get involved in drunken showdowns, and do not participate in any demonstrations.

Fraudsters in Namibia often try to trick tourists by selling fake things like gems or rings. Locals can also give you overprice for souvenirs or hiking trails. Be sure to double-check change and book tours at authorized travel points only.

Women can travel freely to Namibia. Follow the usual precautions and behave as you would in your own country. Do not walk late at night alone and do not wear too much jewelry or open clothing.

How Safe Is Namibia for Tourists?

Namibia is not the safest country to travel.

The main problems are associated with a high level of corruption and bribery, theft, assault, car theft, and the issue of drug trafficking.

Be careful around ATMs.

For tourists, it is not prudent to walk or ride taxis alone after midnight.

Pickpockets can be a problem.

Lately, there are many armed robberies reported; in most cases, tourists get robbed of belongings carried with them in a bag.

For home security, electric fences are installed in almost every house in Windhoek.

Most reported robberies to take place just outside the city center.

The police report that taxi drivers are often involved: they spot vulnerable tourists and coordinate by cell phoning the robbers.

Take these warnings in context; if you are alert and take some common-sense precautions, you should have no problems.

Travelers should have no problem visiting the townships but do not visit the towns alone unless you are familiar with the area.

The HIV infection rate in Namibia is about 25%.

Namibia’s medical system is modern and capable of attending to whatever needs you may have.

Staff is well-trained and so HIV transmission in hospitals is not an issue.

Do I Need a Visa to Visit Namibia?

Tourist visas are valid for three months and generally take three days to process at the Namibian Consulate or Embassy in your country. Not all visitors to Namibia require a tourist visa – those nationalities which do NOT need a visa (for visits of less than 90 days) include South African.

Which Currency Is Used in Namibia?

The Namibian dollar is the official currency in Namibia. It is normally abbreviated with the dollar sign $, or alternatively N$ to distinguish it from other dollar-denominated currencies. It is divided into 100 cents.

The best time to visit Namibia is from July to October, when the temperatures are just above 20°C and the chance of rain is low. This is also the best time for wildlife viewing, making it peak travel season — you will need to plan well in advance.

What Do I Need to Know about Airports in Namibia?

What Are Some Things to Do in Namibia?

Namibia, a country in southwest Africa, is distinguished by the Namib Desert along its Atlantic Ocean coast. The country is home to diverse wildlife, including a significant cheetah population. The capital, Windhoek, and coastal town Swakopmund contain German colonial-era buildings. In the north, Etosha National Park’s salt pan draws games including rhinos and giraffes.

Is the Water in Namibia Safe to Drink?

Is Uber Safe in Namibia?

There is no Uber taxi in Namibia. However, you can use any other taxi service in this country or travel by car.