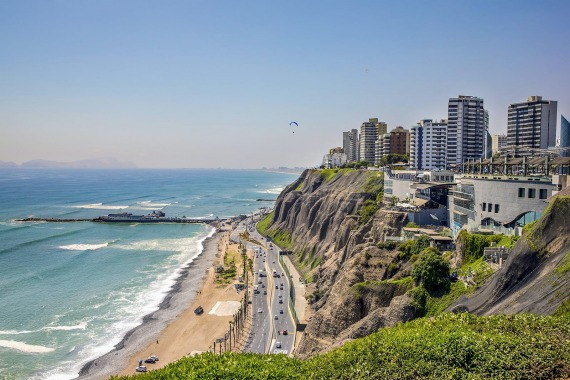 Peru - safety as a country

Lima is the capital and the largest city of Peru. It is located in the Chillón, Rímac, and Lurín Rivers valleys in the central coastal part of the country, overlooking the Pacific Ocean. Together with the seaport of Callao, it forms a contiguous urban area known as the Lima Metropolitan Area. With a population of more than 9 million, Lima is the second-largest city in the Americas, after São Paulo.

In Lima, tourists need to keep track of their wallets and belongings. Serious crimes against tourists are rare here, but there are quite a few petty thefts. Be as careful as possible and do not walk around this city late at night.

Public transport is not very safe; tourists are advised to use taxis. Make sure to use only licensed taxi services. Don't catch a taxi from the street. Make sure the driver has turned on the taximeter.

Pickpocketing happens most often in Lima. Tourists need to be especially careful in crowded places, tourist attractions, and at train stations and airports.

Lima is located in a seismically hazardous area. The city is also prone to landslides and floods. Study the weather conditions before your trip here.

The risk of serious robbery and armed attacks is not very high in Lima. There is little danger of these attacks in the suburbs. However, the likelihood that you will be attacked is minimal. Avoid communicating with suspicious individuals and not walking late at night in remote areas from the city center.

The risk of terrorism exists in Lima, but it is not high. Investigate the political situation before you visit this city.

Fraud is common in Lima. Usually, the victims are imprudent tourists. The most common types of fraud are selling fake goods and services, overcharging taxi fares, and skimming credit cards. Withdraw money only at ATMs at banks.

How Safe Is Lima for Tourists?

Lima is not the safest city to travel to.

The crime index here is at a fairly high level.

The main problems are related to corruption, drug trafficking, vandalism, and theft.

Although Lima has a reputation for being a dangerous city, it is enough to stay away from areas that seem neglected, especially at night.

Don’t carry a lot of expensive things, devices, and a lot of cash with you.

This will not attract the attention of thieves to you.

While there are few violent crimes against tourists, petty theft is common.

Wear anti-theft backpacks and keep your bags in front of you.

If someone is amiable (even wants to shake your hand), ignore them, and they will leave.

It’s okay to find polite people who try to help tourists but stay away from amiable people.

Be careful when crossing the road – pedestrians are often ignored here, even behind pedestrian crossings and green lights.

If you are traveling by car, watch the traffic – local drivers can be very aggressive in driving.

Do I Need a Visa to Visit Lima?

Holders of passports of the following 97 jurisdictions can visit Peru for tourism purposes (unless otherwise stated) without a visa for up to 183 days. A valid passport is a must.

Which Currency Is Used in Lima?

In Lima, the summers are warm, muggy, arid, and overcast, and the winters are long, cool, dry, windy, and mostly clear. The best time to visit Lima is from December to April.

What Do I Need to Know about Airports in Lima?

Jorge Chavez International Airport has regular international flights and it is the busiest international airport in Peru. The airport is located in Callao, which is 11 kilometers away from Lima.

What Are Some Things to Do in Lima?

Lima, the capital of Peru, lies on the country’s arid Pacific coast. Though its colonial center is preserved, it’s a bustling metropolis and one of South America’s largest cities. It’s home to the Museo Larco collection of pre-Columbian art and the Museo de la Nación, tracing Peru’s ancient civilizations’ history. The Plaza de Armas and the 16th-century cathedral are the heart of old Lima Centro.

Is the Water in Lima Safe to Drink?

Tap water is not drinkable in Lima. You should buy bottled water or boil tap water.

Is Uber Safe in Lima?

There is an Uber taxi in Lima. You can call a taxi from the app on your phone. The cost of the trip will depend on the distance and time of day.