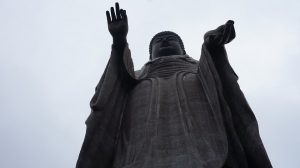 It is not a modern trend to build large statues as they have been constructed in ancient times as well.

The first one that comes into one’s mind is the Great Sphinx, a statue that was built by the ancient Egyptians of the Old Kingdom.

The statue is 20 meters high and still one of the biggest in the world.

However, in the years to come, the construction of ever taller and bigger statues started and we would like to inform you about some of the largest statues in the world.

Rodina Mat, a statue that is 102 meters high can be found in Kyiv.

The statue represents a symbol made during World War II to mobilize the Soviet people.

It is made of stainless steel in 1981 and stands 62 meters tall on top of a museum building, making the overall structure 102 m tall and 560 tons heavy.

The sculpture of Emperors Yan and Huang has been carved into a mountain during the period of 20 years and the structure was finally completed in 2007.

It is 106 meters tall and it represents two of the earliest Chinese emperors, Yan Di and Huang Di.

Guan Yin Statue, 108 meters (354 ft) tall, is actually the statue of the bodhisattva Guan Yin that can be seen on China’s Hainan island.

One side of the statue is facing inland while the other two are facing the South China Sea.

The statue has been built for 6 years to and all the works were finished in 2005.

The Cristo-Rei, 110 meters tall statue, is inspired by the famous Christ the Redeemer statue in Rio de Janeiro.

The Cristo-Rei shrine has been existing since 1959 after a 10 year building period.

The statue is even of the same size as the one in Rio, which is 28 meters (92 ft), but what makes it different is that it stands on an 82 (209 ft) meter tall structure in the form of a gate.

The base of the statue is an observation deck from which you can see stunning vistas of the city of Lisbon.

The Ushiku Daibutsu is situated in the city of Ushiku in Japan.

It was finished in 1995 and it has the title of the 3rd largest statue in the world.

Visitors typically take an elevator to a platform so as to reach an observation deck.

The Laykyun Setkyar is considered the second tallest statue in the world.

You can find it on top of Po Kaung Hills near the city of Monywa in central Myanmar.

The largest reclining Buddha statue in the world can be seen there.

The whole Laykyun Setkyar monument was completed in 2008, while the reclining Buddha has been existing since 1991.

The Spring Temple Buddha is definitely the largest statue in the world, with its total height of 153 meters (502 ft).

The construction of the Spring Temple Buddha started after the Bamiyan Buddhas were blown up by the Taliban in Afghanistan and it was successfully finished in 2008.

It depicts Vairocana Buddha and it is frequently compared to the Statue of Liberty, The Motherland Calls, and Christ the Redeemer.