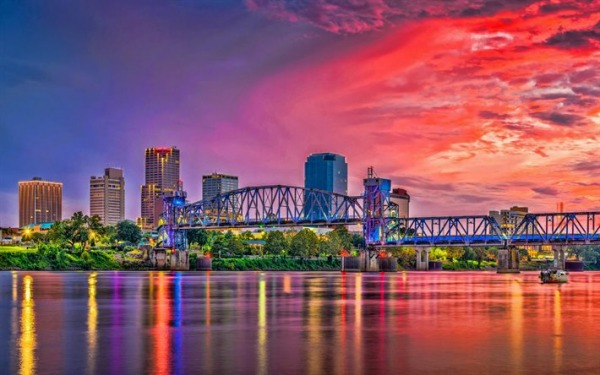 Little Rock is the capital and most populous city of the U.S. state of Arkansas. According to the United States Census Bureau, the city’s population was 202,591 in 2020. As the county seat of Pulaski County, the town was incorporated on November 7, 1831, on the south bank of the Arkansas River, close to the state’s geographic center.

Little Rock is sometimes overwhelmed by floods and excessive heat. However, this is not particularly worrisome as these risks are rare.

In the suburbs of Little Rock, local gangs' showdowns take place, during these showdowns, there are shootings and kidnappings. Avoid these areas and don't get involved with drugs.

Any city in the United States can be the next target for a terrorist attack. You never know when and where it can happen. Nevertheless, if that happens while you are in Jackson, follow the advice of the authorities.

How Safe Is Little Rock for Tourists?

Little Rock is not a very safe city for travelers.

The main problems are associated with attacks, vandalism, and drug trafficking.

The city center around the big hotels and in the River Market area is fairly safe, but if you stray too far off the beaten track, you can quickly find yourself in a dubious environment.

There have been incidents of pedestrian muggings in parking lots around River Market, although most of them were probably not accidental.

Be sure to grab the map if you are exploring the Quapo Quarter and don’t walk around late at night.

The most violent crimes occur in the South End of Little Rock (areas south of I-630) and Southwest Little Rock (65th Street / Base Road / Shico / Geyer Springs Road). The number of homeless people is growing in the city center.

Try to avoid Roosevelt Road, the East End (projects east of I-30 near the Arkansas River), parts of Broadway Street, and areas behind the Capitol Building.

Follow the same precautions as in any other urban area.

Gangs and street crime can occur in North Little Rock, near Dixie, Rose City (around E. Broadway Street), north and west of Historic Argenta (around Pike Avenue and Percy Machine Doctor), and parts of Little Rock near the South End. UALR campus.

Do I Need a Visa to Visit Little Rock?

Which Currency Is Used in Little Rock?

In Little Rock, the summers are hot and muggy; the winters are short, very cold, and wet; and it is partly cloudy year-round. The best times of year to visit Little Rock for warm-weather activities are from early May to early June and from late August to mid-October.

What Do I Need to Know about Airports in Little Rock?

What Are Some Things to Do in Little Rock?

Little Rock is the capital of Arkansas where you will find unique historic attractions, great museums, romantic inns, and scenic parks. Go for a stroll in Riverfront Park, visit beautifully restored houses at the Historic Arkansas Museum and ride in the River Rail Electric Streetcar. Best things to do in Little Rock, AR, with kids include the Little Rock Zoo, the Bernice Garden, and the Museum of Discovery.

Is the Water in Little Rock Safe to Drink?

In Little Rock, AR, water is treated before it goes into the city’s water system. This ensures that your drinking water is clean and toxin-free.

Is Uber Safe in Little Rock?