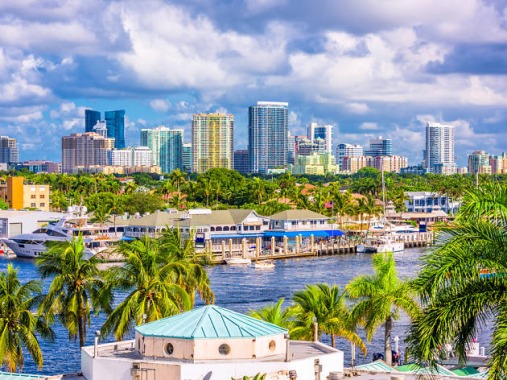 Fort Lauderdale is a coastal city on the Atlantic Ocean in the US state of Florida. It is known as the “Venice of America” due to its expansive canal system.

Fort Lauderdale can be safe if you follow certain measures: do not walk late at night in poorly lit and disadvantaged areas, avoid drunken showdowns and drug dealers, watch your belongings, and expensive devices.

Public transport is safe enough, but during rush hours, you can find pickpockets there. It is better to take a taxi and water taxi. Make sure that you choose the licensed taxi service.

Pickpockets in Fort Lauderdale have fun stealing bags and wallets. Tourists attract attention, so try not to look like a traveler. Take care of your pockets and bags, especially in crowded and crowded places. Leave your valuables in the hotel safe.

The city of Fort Lauderdale is most vulnerable to hurricanes, tornadoes, and floods. Before traveling to this city, tourists need to study weather conditions and the situation from reliable sources to avoid natural disasters.

Serious armed attacks and robberies are rare in this city, but this risk cannot be completely ruled out. Armed disputes can arise among drug dealers or bar-goers. Stay away from such places.

The risk of terrorism in Fort Lauderdale cannot be ruled out. Avoid crowded places, and do not participate in rallies and religious processions.

The main fraudulent schemes here are usually related to criminals' desire to find out your identity and credit card details. Fetching this information usually happens through SMS or calls. Never share this information with third parties.

Fort Lauderdale is safe for women traveling alone. It is recommended to use common sense and move only along well-lit and central city streets.

How Safe Is Fort Lauderdale for Tourists?

Fort Lauderdale is not the safest city to travel to.

However, if you stick to common sense and avoid dangerous areas, it is quite safe to travel in this city.

The crime index here is average, and the main problems are associated with the theft of things and drug trafficking.

There are some parts of the city that tourists should probably avoid if you are walking at night.

Areas frequented by tourists, such as along the beach, shops along Las Olas, and the city center, are generally more than safe.

If in doubt, it’s always good to ask for advice on which areas are safe and which should be avoided.

Local drivers can drive quite aggressively due to traffic congestion during high season.

Try to plan your itinerary before your trip and remember that the US1 tunnels run under Las Olas Boulevard and the river.

It may seem that they intersect on the map, but they are not.

There are quite a few seniors on the road in South Florida, so be on the lookout.

Avoid drunken fights and stay in bars until late.

Remember that drugs are illegal here, so avoid any contact with drug dealers.

Do I Need a Visa to Visit Fort Lauderdale?

Which Currency Is Used in Fort Lauderdale?

What Do I Need to Know about Airports in Fort Lauderdale?

What Are Some Things to Do in Fort Lauderdale?

Fort Lauderdale is a city on the southeast coast of Florida, famous for its beaches and canals, popular with yachting enthusiasts. The Strip, which runs parallel to the A1A Coastal Highway, is home to luxury restaurants and sundeck bars, boutiques, and chic hotels.

Is the Water in Fort Lauderdale Safe to Drink?

The tap water is generally of good quality, but it is recommended to boil it before drinking.

Is Uber Safe in Fort Lauderdale?

There is an Uber taxi in Fort Lauderdale. The fare will depend on trip length and time of the day. You can call a taxi from the app on a smartphone.