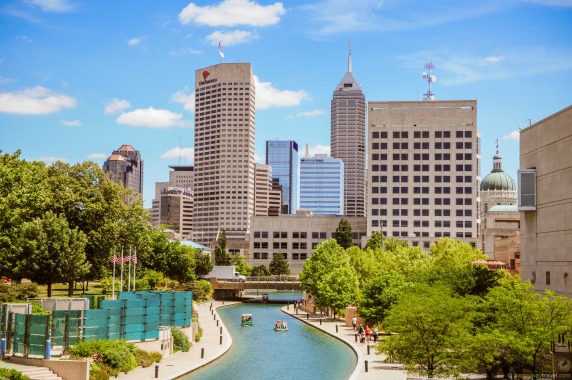 Pickpocketing is not common, but sometimes this kind of thing happens here. Keep track of your belongings, do not leave your phone unattended, keep important documents in the hotel's safe.

Indianapolis is prone to ice storms in the winter, an arid climate in the summer, occasional tornadoes, earthquakes, and floods that can happen any time of the year.

The risk of serious robbery and armed attack in Indianapolis is shallow. Avoid communicating with suspicious individuals and do not walk late at night in areas remote from the city center.

The most common scams in Indianapolis are related to street beggars. Be suspicious of anyone who asks or offers you help.

Women traveling alone can feel quite safe in Indianapolis. The main thing is to adhere to the usual precautions and monitor your surroundings.

How Safe Is Indianapolis for Tourists?

Indianapolis is an average city in terms of safety.

The main problems here are associated with attacks, robberies, and drug trafficking.

Most of Indianapolis is safe, but there are certain areas that are prone to high crime rates.

Most of these high-crime areas are located away from most tourist attractions.

Much of the east side (excluding some areas of Irvington, Warren Park, Beach Grove, and Lawrence), Hogville (immediately west of downtown), the near north side (immediately north of downtown), and some segments of the south side are best if completely avoided.

Usually, tourists are not affected by the showdown of local gangs and violent crimes.

Downtown, the Broad Ripple and Fountain Square areas remain safe and are generally well-guarded even after dark.

Use the same vigilance and precautions as you would in any other big city in the Midwest.

Remember that if you are walking in the city center, you may be approached and asked for money, cigarettes or food.

Be vigilant and give money to these people judiciously.

Do I Need a Visa to Visit Indianapolis?

Which Currency Is Used in Indianapolis?

In Indianapolis, the summers are long, warm, humid, and wet; the winters are short, very cold, and windy; and it is partly cloudy year-round. The best time to visit Indianapolis is late spring or early fall when the weather is warm and pleasant.

What Do I Need to Know about Airports in Indianapolis?

What Are Some Things to Do in Indianapolis?

One of Indianapolis’s biggest claims to fame is the exciting range of sporting events it hosts, including the famous Indianapolis 500, the world’s largest one-day sporting event. It is also the headquarters of the National Student Sports Association (NCAA). The city’s other claim to fame is that it is the largest city in Indiana and the second-largest city in the American Midwest.

Is the Water in Indianapolis Safe to Drink?

Tap water is not drinkable in Indianapolis. You should buy bottled water or boil tap water.

Is Uber Safe in Indianapolis?