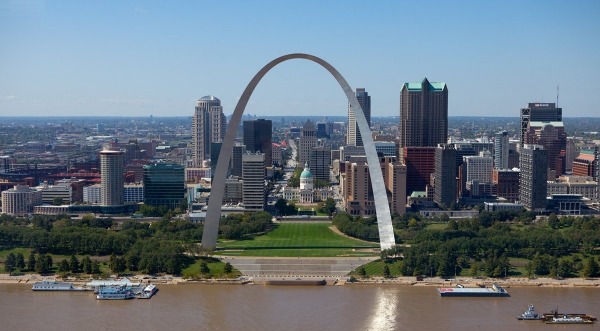 St. Louis is the second-largest city in Missouri, United States. It sits near the confluence of the Mississippi and the Missouri Rivers, on the western bank of the latter. A “Gamma” global city with a metropolitan GDP of more than $160 billion in 2017, metropolitan St. Louis has a diverse economy with strengths in the service, manufacturing, trade, transportation, and tourism industries.

Sant Luis is quite a criminal city, although it is quite safe in tourist places and centers. Remain vigilant and use common sense when traveling here.

Public transport is quite safe, but it's best not to use it at night. There are also many pickpockets on buses and subways during rush hour. Use only licensed taxis.

Pickpockets are common in crowded and tourist spots. Be careful with those who ask or offer help - they can be pickpockets. Always keep an eye on your bags and don't carry a lot of cash with you.

Saint Louis is potentially in a seismic hazard zone. However, the risk of an earthquake is still not great here.

In the suburbs of St Louis, local gangs' showdowns occur; during these showdowns, there are shootings and kidnappings. Avoid these areas and don't get involved with drugs.

How Safe Is St Louis for Tourists?

St. Louis is not considered to be the safest place to travel, with a high crime rate.

St. Louis has been considered quite dangerous for tourism in recent years.

However, most crimes are known to take place away from tourist destinations.

The most popular and visited areas of the city, such as Clayton, Downtown, Central West End, and Forest Park, have meager crime rates.

However, use common sense and be vigilant at night.

When you are in the city, the general rule of thumb is that the areas north of Delmar Boulevard are less safe than the south.

Some Metrolink stations are located in areas that may seem dubious after dark.

But most of the downtown areas around Bush and Union Station and the University of St. Louis area and airport suburbs are generally safe and patrolled by police.

Stay vigilant and avoid contact with suspicious individuals. If a beggar clung to you, try to ignore him and leave quickly.

However, if you are threatened with violence, it is better to give the attackers what they ask to save your life.

Always keep an eye on your belongings and do not leave bags, wallets, and money unattended.

Do I Need a Visa to Visit St Louis?

Which Currency Is Used in St Louis?

In St. Louis, the summers are hot and muggy; the winters are frigid, partly cloudy year-round. The best times to visit St. Louis are in April and May and September through October.

What Do I Need to Know about Airports in St Louis?

What Are Some Things to Do in St Louis?

With quirky food creations, sprawling green parks, a City Museum unlike any other, and the Arch — the Gateway City is a fun place to visit.

Is the Water in St Louis Safe to Drink?

Is Uber Safe in St Louis?