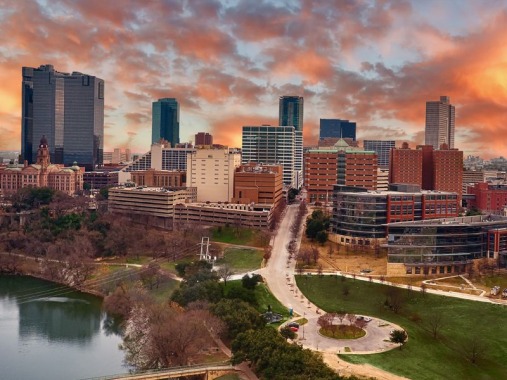 Fort Worth is in the Prairies and Lakes region of Texas. Sometimes referred to as Cowtown, it is by far closer to its cowboy roots than neighboring Dallas.

Warnings & Dangers in Fort Worth

In general, the city is quite safe and well guarded by the police. Keep track of your belongings and your surroundings. Do not leave valuable devices unattended.

Public transport is not popular here and may not run on schedule. Use your car or taxi to get around. Taxis are reliable and safe when using licensed services.

There are not many pickpockets in Fort Worth. However, in tourist spots and on buses during rush hour, some criminals have fun stealing wallets and bags. Be careful.

The region is prone to tornadoes and droughts. Study the weather conditions before your visit and follow the local authorities' instructions to avoid threats.

Serious armed attacks and robberies are rare in this city, but this risk cannot be completely ruled out. Armed disputes can arise among drug dealers or bar-goers. Stay away from such places.

The most common fraud in this city is an attempt to find out your personal data and your card details. Avoid passing on this information via SMS, email, or calls from strangers.

Fort Worth area is relatively safe for women traveling alone. It is enough to follow standard security measures. Watch your surroundings and be careful with strangers.

How Safe Is Fort Worth for Tourists?

Fort Worth is a relatively safe city to travel to.

The main problems are related to the theft of belongings, vandalism, assault, and drug trafficking.

The city’s central arts and entertainment district is well policed.

But the city’s freeways can be quite dangerous if you are not accustomed to driving in such high volumes of rapidly moving traffic; keep this in mind when planning a trip.

In Fort Worth, you will be safe if you follow the usual precautions.

As with any other large city, be vigilant and aware of your surroundings in Fort Worth. Make sure you lock your car and hide any valuables inside.

The places to avoid after dark are East Side, Southeast Side(especially Stop Six), the Como neighborhood, and the Trails/Calmont neighborhood. All these places have a high rate of gun crimes, from armed robberies to shootings.

The Stockyards Bar and Club District gets rowdy on Friday and Saturday nights, but the nightlife at Sundance Square in Downtown is usually more laid back.

Do not get involved in drunken fights and avoid any relationship with drug dealers.

Do I Need a Visa to Visit Fort Worth?

Which Currency Is Used in Fort Worth?

The best time to Fort Worth is between September and November when the temperatures aren’t overwhelmingly hot, the tourist traffic has died down, and the Texas State Fair is in full swing.

What Do I Need to Know about Airports in Fort Worth?

Dallas/Fort Worth International Airport is the primary international airport serving the Dallas–Fort Worth metropolis area in the U.S. state of Texas. The airport is located 38 km from the city center. It is the largest hub for American Airlines, which is headquartered near the airport.

What Are Some Things to Do in Fort Worth?

Fort Worth is the epitome of everything cowboy-related; It was once home to pastoralists, criminals, and cowboys. There are many interesting museums to visit, such as the Kimbell Art Museum and the Amon Carter Museum of American Art.

Is the Water in Fort Worth Safe to Drink?

The water in this region is quite clean. However, drinking tap water is not recommended. Use boiled water or buy bottled water.

Is Uber Safe in Fort Worth?

There is an Uber taxi in Fort Worth. The fare will depend on trip length and time of the day. You can call a taxi from the app on a smartphone.