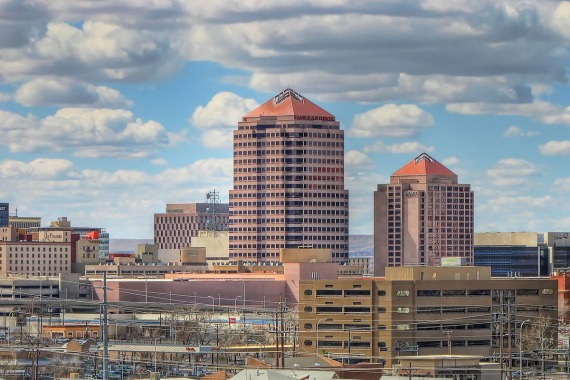 Albuquerque is the most populous city in the U.S. state of New Mexico. The city’s nicknames are The Duke City and Burque, both of which reference its 1706 founding by Nuevo México governor Francisco Cuervo y Valdés as La Villa de Alburquerque. It is the principal city of the Albuquerque metropolitan area, which had 915,927 residents as of July 2018.

The city has a fairly high level of violent crime, so it is important to be very careful not to walk late at night to avoid streets and districts remote from the city center.

Public transport is well developed, but thieves and pickpockets often use buses. Avoid travel to terminal stations. Use only licensed taxi services. If you are traveling by your own car, park only in guarded parking lots.

Pickpocketing occurs in Albuquerque at every turn, so wear an anti-theft backpack, look after your belongings, and don't leave your phones and wallets unattended. In crowded places, keep an eye on your surroundings.

In Albuquerque, it is worth taking care of protection from the sun and heat. There are also sometimes thunderstorms here. Follow the weather forecasts.

In the suburbs of Albuquerque, local gangs' showdowns take place; during these showdowns, there are shootings and kidnappings. Avoid these areas and don't get involved with drugs.

Terrorist attacks in the city are often associated with internal showdowns. External threats from terrorist organizations usually do not exist in the city.

The most common scams in Albuquerque are related to street beggars. Be suspicious of anyone who asks or offers you help.

How Safe Is Albuquerque for Tourists?

Albuquerque is an unsafe city for tourists.

The main problems are related to vandalism, drug trafficking, and theft.

Travelers should also remember that this city has the highest rating in the country for car thefts.

If you are traveling in your car or rented car, carefully lock it, take care of additional anti-theft measures, and the only park your car in guarded paid parking lots.

The city center is relatively safe during the day.

It is better to avoid walking in the area of ​​University Boulevard at night.

The convention center near San Pedro downtown can be a quite scary day and night.

It is better to avoid this place or visit it only in the company of like-minded people.

There are many crooks and beggars on the streets.

Be attentive to your surroundings and watch closely those who ask or offer you help.

In general, if you follow common sense, watch your belongings and your car, and be suspicious of the people around you, you will avoid major problems in Albuquerque.

Do not trust people who offer you a free drink at a bar – most likely, they will inject you with opiates to poison and rob you.

Do I Need a Visa to Visit Albuquerque?

Which Currency Is Used in Albuquerque?

In Albuquerque, the summers are hot, the winters are short and very cold, and it is dry and mostly clear year-round. The best time to visit Albuquerque is from September to November.

What Do I Need to Know about Airports in Albuquerque?

What Are Some Things to Do in Albuquerque?

Here you can take a scenic hot air balloon ride over the city, play a game on one of the golf courses, go mountain biking in the Sandia foothills, hike through history, go kayaking on the waters of the legendary Rio Grande, or stroll through the Old Town.

Is the Water in Albuquerque Safe to Drink?

Is Uber Safe in Albuquerque?